The Rotary Young Photographer Competition staged at the Dartmouth Visitor Centre attracted nine entries for the two age groups producing some outstanding photographs. The theme for the competition was ‘A different perspective’.

The judges were Ginny Campbell and Stephen White and both spoke in glowing terms about the entries.

Ginny Campbell has a background in teaching, but since retirement has developed her interest in photography, has had her photographs accepted in various exhibitions, gained recognition from the Royal Photographic Society and judges for the Photographic Alliance of GB.  She is the author and photographer of the book “Dartmouth Through Time” which traces the history of Dartmouth by replicating old photographs of the town with new ones from the same vantage point.

Organiser Trevor Branton welcomed and thanked the judges, staff of the DVC, Manager Karen Perrow, teachers and contestants. He presented “winners” certificates and prizes and “Certificate of Participation” to all contestants. 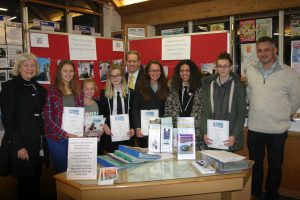 Judges Ginny Campbell and Stephen White with the Young Photographers. Trevor Branton of the Rotary Club of Dartmouth is centre and Junior winner Freya Harding is third from left.

The Junior (7-10) Winner was Freya Harding who also won the public vote. The Senior (14-17) winner was William Donoghue with runner-up named as Eryn Harding. The other entrants were Abigail Lees, Amy Brown, Keeley Graham, LaurenJade Ahearn and Tori Cox. 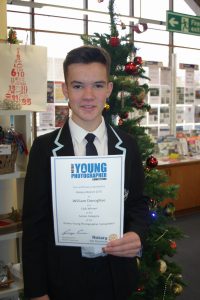 Freya and William now go forward to the District (Devon and Cornwall) final. 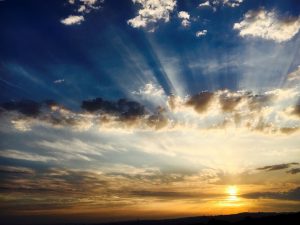