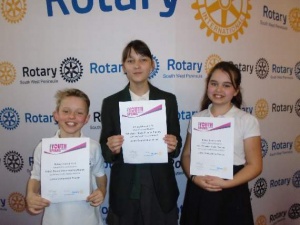 The Stoke Fleming Primary School pupils who will be heading to secondary school in September travelled to Saltash for the competition recently.

The chair of the trio was Bebe Bear, Lulu Potgeiter’s role was to speak about the problems with palm oil production and Arthur Benns proposed a vote of thanks at the competition.

Nigel Thorpe from Dartmouth Rotary attended the event which had a total of eleven teams competing. All these teams had already won their local and area heats.

He said: “I am always amazed at the levels of confidence, enthusiasm and preparation shown by primary school pupils who enter this Rotary organised competition.

“The group from Stoke Fleming Primary School did a fantastic job in putting the message across about the ill effects of palm oil production.”

Sadly, the team did not finish in the top three of the final.